A fair amount happened this weekend. Thanks so much to those of you who sent stuff in – Elanor Swan, Paul Peters, Skusey, Andy Burnett, Marie Williamson, Will Mather and Lucy Wasinski. First up, let’s start with some……

Claire Campbell Did the series of Isle of Wight fell races last week – an AS, a BM and a CL – over 2 days. From what I understand she acquitted herself marvellously, “enjoying” the different challenges of each race as they came.

Chris Webb – had a fabulous day out last week at the 3 shires race. Despite having an excellent pair of legs on him, his navigational nouse let him down on Blisco and he dropped a fair few places in short order. Or was that another race that he did? I’m losing the plot in terms of who did what where. Ah well, it probably doesn’t matter. He had a grand day out anyway.

And on with the show….

Will Mather was at the Ladybower 50…. A “flat” 51miles around Ladybower, Derwent and Howden res some tough miles in the mid section as I was getting rather annoyed I couldn’t run up the amazing hills I was looking at, Pete Nicholson came to give me a kick up the ass and Luke Holme came to give me some rather insulting words of encouragement for the last 10miles. I finished in 8hr 10min, there were 2 of us on this time so not sure yet if I was 4th or 5th but either way I’m really pleased with it.

Skusey has been serial racing again – Utterly Butterly was his first outing of the week…. Firstly, this is a trail race and a very runnable one at that. The old question of what to wear has returned. I opted for the long sleeve having decided that the long sleeve plus vest was overkill. Mary Jeal went for the hard as nails vest only option. Who was right? Debatable but she had goose bumps and i was sweaty so take your pick. I pushed well but the legs felt yesterdays race. Chris Jackson overtook me just at the end but I didnt half make him work for it. We got 6th and 7th consecutively. Mary was my only fellow GDHer. Ive not seen the results yet so cant say where she came.

Paul Peters was given the task of writing the Macc Half report by his fellow racers….. Apparently my last report wasn’t a travesty so I’ve been “given” the honour of reporting back on behalf of today’s Macclesfield Half lot. After Thursday’s reports of storm-level rain and winds hitting the area on Sunday morning, I (and presumably everyone else) had mostly written off the race as a nice lesson in staying headstrong. However, unless it changed dramatically after we left, all Macclesfield had for the day was a pleasant mid-teen temperature and a nice bit of sun.

With the classic British weather talk out the way I guess that just leaves the meat of the race that people are here to read, the results. I’ll preface these by clarifying that it’s a hilly course (275m total elevation according to my strava), so it’s probably best to knock a good 10 minutes off all our times to account for that 😊

After Jeroen downplaying the hills all week they hit me like a brick at 16km in, but with a bit of “feather running” I managed to hold on to my aim of 1:20. Dan Stinton was the next harrier back, looking far too happy for someone who’s just finished that race, closely followed by Rich White who arrived to shocked faces, making his third harriers appearance in less than a month!! He was even more closely followed by Jill Wood who stormed through to finish as 2nd FV40. The next runner is a mystery who I’d never heard of, but “Jerven Peters” (no relation I’m aware of) came in next, and I’m told he also exceeded his expectations for the day. Back to the regulars, Ian Crutchley was next over the line, again very happy with his time on the course. Emma Retting came through next, and was more than happy to take a nice little spot prize for a well earned race time. Rounding off, Jo Brack shook away the conversational skills of Charmayne Brierley to carve a bit of time between the two of them at the finish line (although I’m told Charmayne is saving herself for an upcoming triathlon so I guess we’ll let her off). 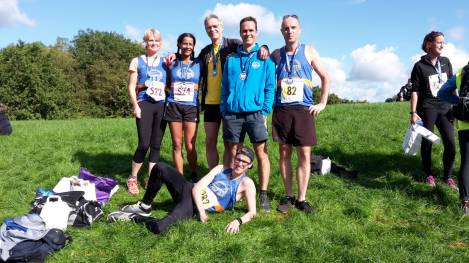 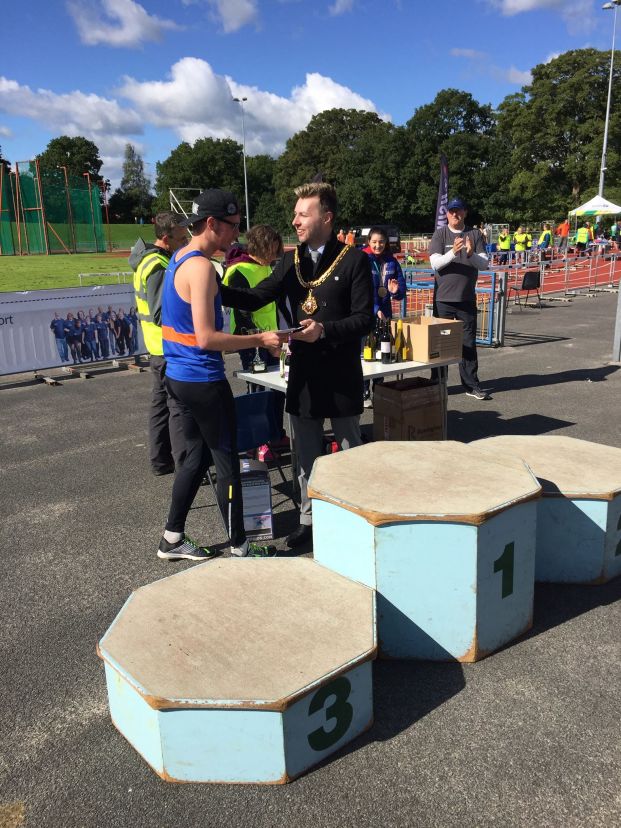 Marie Williamson sent me in this rather marvellous cryptic report….  – So…this morning I boarded a bus, alongside about 4000 other people, & was driven & abandoned up in the middle if nowhere. The run started with a bagpipe band playing us off. I searched for Nessie on my way back to town, she wasn’t anywhere to be seen. Crossed the finish line in 4hrs 39 mins. I’ll do almost anything for a tin of soup!!
Loch Ness marathon…in case you haven’t guessed

Quick Swan running update – full family racing all day and all night at Equinox24 in the company of Marple runners and friends. Caitlin was first girl (fifth overall) in the kids’ race closely followed by Josie as third girl. Phil and I did some ‘creditable’ running as a quarter of a team of eight but no placings for us unsurprisingly.

Impressive running by Caitlin and Josie this weekend.

Andy “deadeye” Burnett sent me in this quick write up Saturdays Target Sprint Event in Llandovery. Skuse and myself attended this event to get some more practice in before the Nationals Final on the 7th October. A good 150 mile journey to the outer edges of the 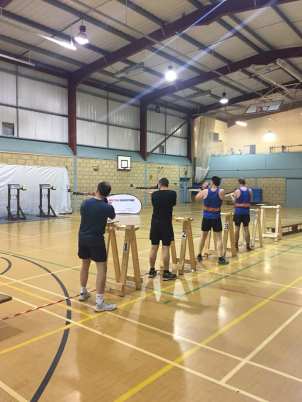 Brecons saw Skuse pondering his nationality as he had a chance of bagging the Welsh Championiship title as well as overall event if he played his Grandmothers Welsh heritage card, in the end he decided to remain English for now. Paul won his heat his heat in 6 minutes 12 seconds, using 6 shots to take down 5 targets after the first lap and a straight 5 for 5 on the second lap, on what was an extended 450 metre course around a rugby pitch, the shooting thankfully in doors as the rain persisted throughout the day. Burnett meanwhile had decided not to open a debate about his recent DNA tests, and admitted to be English, and competed in the same heat as Paul taking third place, after using 14 pellets to take the first 5 targets down and used his maximum 15 shots for the second shooting cycle. We had to wait for the 2nd heat to see the overall placings with Skuse being pipped by a proper Welshmen to get 2nd place overall, and Burnett dropping to 7th out of 8 overall. A great day out with a friendly crowd and the opportunity to mix with the youngsters from the GBR team who all willingly shared all their best tips for shooting faster and straighter. More work needed for the Nationals in a couple of weeks time.

Nick Ham took his brother on a rather damp and undulating Leighton 10 over the weekend. You can see Nick sporting his rather fetching Snowdonia Marathon poncho which may or may not comply with FRA race rules…. He was fairly pleased with his 1:18 finishing time, but would have stayed drier had he stayed up north.

Kate was off in the Lakes doing the Coniston 15k which, from the pictures, appears to have a couple of slightly damp sections underfoot. … she said Quite pleased with how this race went given my rubbish lungs this past 2 weeks. The sun came out and I got PB on the route (1hr 37). Wet shoes!

Lucy Wasinski was off at Biggin this weekend doing the 2nd round of the Dark and White Autumn trail series. I have no idea if I missed round 1, or if she missed round 1, or if it even existed. As it is, the course went along the Tissington trail and then back down a river. Or next to a river, I suspect, as D&W don’t tend to get people to swim on their trail running events. Not yet anyway. No idea on placings, but she probably did pretty damn well.

Five GDH runners today at Southport Seaside 10k – apparently flat as you like, with a bit of a headwind – which is what happens when you run laps for a 10k I guess. Still, a small but perfectly formed GDH crew headed across to Southport to enjoy the seaside air. Nice running you lot- I have to confess I had no idea about it until I saw Steves message offering lifts!
Craig Leith 38.38
Steve Page 39.41
Dave Edmunds 45.07
Joe Gavin 46.44
Tony Hillier 1st V70 48.44